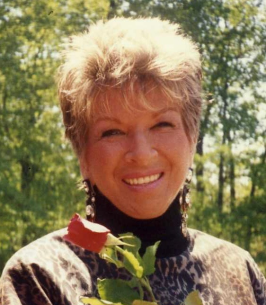 Beverly Marie Fredenburg Randick-Koslo, age 95, formerly of Chicago, passed away peacefully on Monday, February 14, 2022. Beverly was a 1944 graduate of Waller High School. She married Donald G. Randick in 1951 and moved to Evergreen Park where she became an active member of the Evergreen Park Presbyterian Church. Here she taught Vacation Bible School while raising a family of nine children. In 1978 she began a successful career as a Beauty Advisor for Estee Lauder Cosmetics at Carson Pierre Scott & Company. While her skills with make-up brought confidence and beauty to others, offering kindness and a friendly ear were equally her forte. Following retirement and losing Donald in 1994, Beverly then met and married John T. Koslo spending 20 years together until his passing in 2014. Beverly and John embraced life through travel, dining, and spending time with family. During this time, she served as Deacon making contributions including cooking meals for church dinners. Beverly shared her memories of riding on the equestrian team in high school, skating at the roller rink, and “cutting a rug” on the dance floor; however, her greatest passion was family. She served as the hub of her family mending scratches, broken bones, and the occasional broken heart. She always kept an open door encouraging any and all to stop by anytime for conversation, a game of Scribbage, or better yet, no reason at all. Beverly was a beloved wife, mother, grandmother, great grandmother and dear friend to many. Beverly will be remembered for her spikey hairstyle, flashy earrings, and infectious smile, but truly missed for her genuine, deep love to see others happy. She is preceded in death by her parents Jerome and Frances Fredenburg, husbands Donald Randick, and John Koslo, and her son Robert Randick who passed in 2009. She is survived by 8 children: Thomas (Gail), Denise (the late Edward- 2014) Radek, Darcy (Thomas) Martyn, Teri (the late Dennis-2016) Gritz, Tami (David) Sizemore, Kelly (George) Rumel, Michael (Jasmin), Jerry (Carol). Additionally Beverly will remain in the hearts of her 30 grandchildren and her 32 great-grandchildren with another two on the way. Memorial Visitation Saturday, March 5, 2022 at 10:30 A.M until time of Funeral Service at 11:00 A.M. at Christ Lutheran Church, 14700 S. 94th Ave., Orland Park on Saturday, March 5, 2022 at 11:00 AM. Interment Private. In lieu of flowers, please consider donations to the Ronald McDonald House Charities.